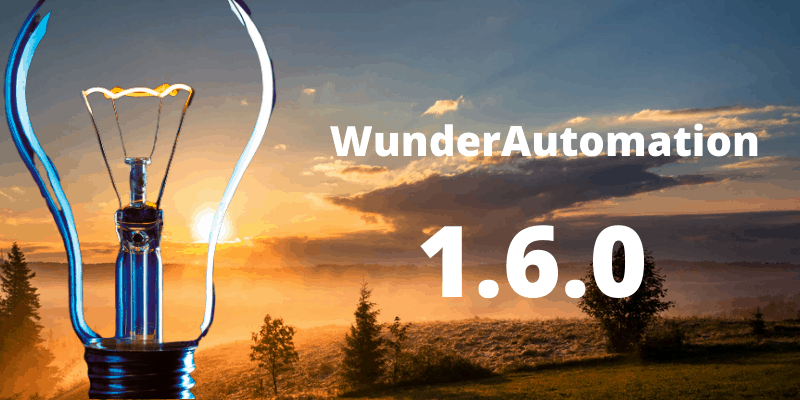 Today we’re releasing WunderAutomation 1.6.0 which is an important milestone.

Along with this we’re releasing new versions of all add-ons. so when upgrading make sure to also upgrade your WunderAutomation addons at the same time.

The most important new feature is that we have introduced steps. In earlier versions of WunderAutomation each workflow could have one or more filters followed by one or more actions and that was it.

In version 1.6.0 each workflow instead consists of a number of steps. A step can contain either a filter OR an action and you can add as many steps as you like and easily reorder them. So it’s now possible to for instance run a workflow when a new WooCommerce order comes in, send one email to the site administrator and if the order contains a specific product, send an additional email to someone else. This type of setup would required multiple workflows in previous versions.

This means that you can build more advanced workflows right now but the more important aspect is that it paves the way for a few more exciting updates in future releases, like if-then-else logic and even loops.

Older workflows you have already build with an earlier version of WunderAutomation will be automatically converted to use steps so this upgrade is 100% backwards compatible.

We’ve spent a lot of time refreshing the workflow editor user interface. A lot of changes was needed because of the move from fixed filters and actions to the much more flexible steps, but there are other improvements.

Since they are so important concepts, we’ve made it easier to understand the difference between objects and parameters whenever we refer to them in the UI. The above screenshot is from the parameter selector visible in each action.

You will also notice that the parameters have moved from sitting in the right sidebar to being visible on each step. This isn’t only for convenience, it’s also because of some improvements in how we handle objects in a workflow as described in the next section below.

Since steps are front and center in the improved workflow we’ve put a lot of energy into making them easy to work with. Steps can be added, reordered, minimized and removed with ease making them much easier to work with.

Even if most of our users seem to prefer editing workflows on a traditional desktop or laptop, the new user interface also a lot more responsive. This will improve the user experience on smaller screens like and tablets.

The next big change in this new version is a little less obvious. As before each trigger will supply one or more objects into the workflow. A less known feature was that some actions also added new objects. This is now made much more visible in the editor. For example the “Add user” action now clearly lets you know that it will add an extra user object named “newuser”:

Let’s say that the in next step you want to add a custom field to the new user, that is now very easy:

Since there’s a lot of changes in this release we’ve doubled down on our efforts on quality.

We have previously written about Carson our continuous integration setup. Well, first Carson has moved into the cloud and is now implemented as a set of GitHub Actions. Second, we’ve swapped out the underlying acceptance test framwork from Codeception to Laravel Dusk which we find a bit easier to adapt to our needs.